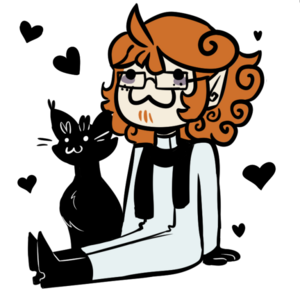 Echoes are sentient beings or beasts who have been infected with Corruption's pure essence (one way or another) and are thus destined to become a unique iteration/reincarnation of the virus. Their personalities and behaviorisms may remain intact as long as their Black Venom levels are below a certain point, but they adopt the overall morals and desires of Corruption. Most interesting is the seemingly "forced" personality alteration of people/creatures with violent/malevolent tendencies. Due to the virus's obsession with "protecting the Innocent", they adapt a desire to protect what would be their prey, sometimes more aggressively. Regardless, they would wind up infecting their prey eventually. Witnesses would consider this to be "out of character" for someone who was previously a predator.

There isn't a single circumstance that leads to one becoming one of Corruption's Echoes, though they all have one thing in common: Black Venom. In some cases (like Jason's), someone can be "chosen" to be an Echo and fed the essence. The venues are endless; one can be infected with the virus' essence through physical, mental, and/or spiritual means. Their thoughts and wishes are altered, and their inner voice is twisted into that of the virus itself.

Symptoms of being an Echo include but aren't limited to: pale skin, cold to the touch, confusion, temporary paralysis with a tendency to "talk" to one's self, delusion, salivating/vomiting black liquid, dizziness, nausea, dark circles under the eyes, lack of a "normal" appetite, and an unnatural lust for "bonding" with another person/beast.

Some of these symptoms can be naturally occurring in a different form, i.e. paleness and cold, clammy skin. While it's true that some monsters (i.e. vampires) are naturally cold to the touch, this can also be a symptom of being an Echo. However, vampires would have the easiest time hiding this symptom, as they can simply declare it a sign of their vampirism. However, differences arise in that a vampire, for example, would infect whomever they bite and suddenly develop a resistance to the sun. Confusion can present itself in many different ways. For example, Dr. Jason Cunningham (Solar Eclipse) often vocalizes his internal conflicts, declaring he doesn't know who he is. Maybe, he says, he IS Corruption. How is he doing all of the things the eldritch virus can do? Why do people eventually collapse when he makes eye contact with them? When he has these "dialogues", he's often unable to move, shivering and incapacitated until he either regains control of himself or his "subconscious" (Corruption) acts for him. He'll occasionally declare himself to be the virus, covering anyone or anything near him in black slime. This is usually preceded by him aimlessly wandering the halls or around his office.

An Echo develops a strong delusion that the infection it spreads is beneficial in some way. Jason, for example, deceives a researcher into thinking he has the cure for a "disease" when in reality his true goal is to infect the target demographic of the researcher's experiments, similar to how Corruption itself considers its infection to be a gift or a blessing. In some cases, Echoes develop a deep, lustful desire to "bond" with someone, usually their prey. Their soul usually succumbs when their mind and body have been plagued.

More extreme symptoms present themselves when the Echo's Black Venom levels (the virus's influence) reaches a certain threshold. At this point in time, actual physical alterations occur, twisting and stretching the Echo into its own iteration of Corruption's physical form. There is another, more monstrous form beneath that shell, but the virus can't transform unless it has enough strength to do so.

The Echo's voice will often either be layered or replaced with that of the virus; if the virus acts through or with the Echo, a lot of the Echo's behaviorisms will change.

The abilities an Echo gains is highly dependent on the context of their forms before the essence invaded. Because of this, no Echo has the exact same set of skills, save for the defining abilities that would make their status as an Echo obvious, i.e, creation and control of black slime, absorption of other people/creatures, etc.

At this point in time the Echo can sculpt and control tentacles and other forms out of the black slime it produces. Echoes become more agile than before, able to move incredibly fast and even melt themselves or anything around them into black slime depending on how much the host has given in to the influence. In extreme cases, it can possess someone while in its liquid form and infect them from the inside out, acting through them and often turning them into monstrous, demonic creatures based on the Echo's personal taste.

When Corruption's influence reaches a certain level, an Echo can actually produce parasite eggs (sometimes even full-grown parasites) within itself and release them. The Echo can also "consume" its prey, opening its torso, swallowing, etc. them only to "rebirth" them later as one of its "children". When entranced, the Echo speaks of the entire process like the virus itself would. This can be really off-putting for witnesses.

Once every so often, after the Echo has claimed enough victims, it can create a "Nest" by ejecting a fleshy biological material from its body via a method of its choosing, a common method being through self-inflicted wounds that heal after the Nest has formed. Creating a Nest is a really tiring process, however, so the Echo tends to rest inside the structure while its previous prey, now completely corrupted, would bring victims to "feed" to it. Naturally, the delusions would make the Echo and its children believe that they're saving said victims. When necessary, an Echo can reabsorb and recycle the Nest when it has gained enough strength.